Some people hunt big game in Africa. Brian, the new man in my stepdaughter Genne´’s life, has been on Safari there two times, and his new home has trophies on the wall, on the floor, and on the furniture.  He has promised Genne, who as I write is fishing with him in Alaska, a hunting trip to Africa next year. I won’t be going.
Some people hunt deer. My stepson, Scott, hunts deer during bow season and gun season, all over Michigan. He’s been known to spray the urine of some animal on himself so that the deer will not detect him in his tree stand. Scott’s first buck is mounted and now hangs on the wall of our home. I love venison, but I don’t hunt deer.
I hunt moles.
Our back yard, which we are trying to keep in prime condition since our house is on the market, is currently crisscrossed by brown trails where the formerly “cute” animals have tunneled away, in pursuit of grubs. Our lawn looks like a large-scale version of Frankenstein’s face, or perhaps the face of a hockey goalie before the discovery of facemasks.
The preferred method for hunting moles is to stand in the lawn with a pitchfork. When you see a moving mound in the grass, you jab it with the pitchfork. Sound easy? At dinner the other night, Kim spotted the moving mound just outside our window. I dashed out to the garage, grabbed my weopon, and started jabbing frantically in the general area where Kim was pointing. I continued to jab the whole length of the mole’s tunnel system. It was a very satisfying feeling.
Unfortunately, a couple of hours later I saw that I had somehow missed my target. Kim patiently explained that I should have listened to her and stabbed where the mole actually was tunneling. (Readers who are married can fill in the rest of this paragraph.) Suffice it to say that I succeeded in scaring the mole for a few minutes, provided it was actually aware of my efforts.
Kim and I are environmentalists – members of Audubon, the Nature Conservancy, the North American Butterfly Association, etc. So I did not feel good about inserting poisoned nuggets into the mole’s tunnels. The mole, judging from its continued tunneling, was not impressed either.
So it was back to the hardware store, this time to purchase some sort of toxic granules to spread on Mole City in an effort to kill the grubs that the moles eat. (I rejected the poison smokebomb that the guy at Ace Hardware suggested as too susceptible to user error.) That was this afternoon, and the results are not in. One consolation is that we have a new reverse osmosis system on our drinking water, so I will not be drinking the poison I have introduced into our eco-system.
Another consolation: I am not alone. No, I do not mean Ahab’s obsession with the white whale (who, by the way, did not leave brown trails on the ocean surface). Nor do I mean Bill Murray in Caddyshack, for he seemed comically pathetic when compared to my heroic efforts. What I have in mind is my brother-farmer in Grant Wood’s “American Gothic.” 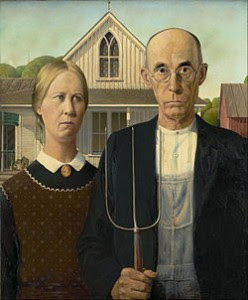 I know why he looks so sad. And I also understand the reproachful look on his wife’s face, clearly directed at his incompetence and his failure to listen. If I ever bag my trophy, I will have Kim photograph it and then Photoshop it onto the sad hunter’s pitchfork.
Posted by dhstringer.com at 9:29 AM