“Are you here to see the Brown Booby? It’s out on the end of the pier if you want to take a picture.”
My wife’s words evoked a slow smile from the young man with a long-lensed camera slung around his neck. “No, but I do take pictures of surfer girls sometimes.” I had the feeling that he had considered several answers before coming up with that one.
But let me explain Kim’s excited question. We were on our last day at the Space Coast Birding and Wildlife Festival, and we’d spent three days in classes and on birding field trips. Kim was the one with the great passion for bird photography, which joined her love of nature and her artist’s eye into a Perfect Storm that led her to take over 17,000 photographs, mainly birds, in the few short months since I bought her a digital point-and-shoot for her birthday. She had since upgraded to a Canon Rebel with a telephoto lens that made me feel very, well, humble. I need an image stabilizer, and not for my camera lens. Imagine what her 500mm lens now does to my manly self-esteem?
Now, I’m a birder, too, but I’m probably half a step behind Kim in my knowledge and passion. Maybe a step and a half. For the Festival I carried the starter camera, which Kim had to remind me to use if I really wanted to take pictures, and the binoculars, which I used mainly to spot birds for Kim to photograph.
The classes fueled the fire stirring in Kim. We learned basic principles of bird photography, such as don’t take everything with your camera set on “automatic,” consider using a tripod, and go where the birds are. We learned memorable peculiarities about how birds behave, most of which I’ve forgotten. And we learned that we probably won’t ever learn how to do Photoshop, especially if the curriculum starts on Chapter 5 of the Instruction Manual.
You of course know the old saying about the early bird getting the worm. What you might not realize is that in order to photograph early birds you have to get up even earlier. We were up and out the door, snarled in camera and binocular straps, lugging lenses, bird books, water and bug repellant, before Starbucks opened and long before our bed and breakfast served the breakfasts we’d paid for. But if you want to see a Florida Scrub-jay, you have to be where they are when they get there. We were and they did. And fortunately, Starbucks had opened by the time our morning field trip had concluded.
Kim and I heard about that Brown Booby while on a walk led by two women who could recognize birdsongs the way I can identify - well, come to think of it, I can’t really identify anything that well. They told us that the Brown Booby is usually only seen in the Florida Keys or out somewhere in the Caribbean, but that one had blown up to St. Augustine and was roosting out on the city pier. It was a must-see, and many of our camera-toting colleagues said they were going to go see it. I confess that I was as much drawn by the name as by the rarity of the sighting (I pick race horses the same way - by their cool names), but there we were, making our way out through the fishermen and tourists, the young locals throwing small hammerhead sharks down onto the surfers below and the geezers maybe a little older than me, in their shorts, calf-length black socks and tennis shoes, sitting in the shade. Pelicans watched us without much apparent curiosity. And standing on a ledge behind a small shed was the rather unremarkable looking Brown Booby. It was brown. 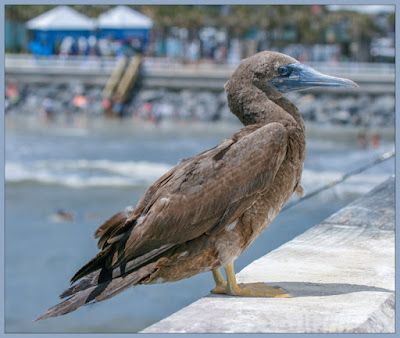 I also remember red. On our way into our Photoshop class Kim spotted a magnificent Northern Cardinal on a tree in the parking lot. The sun was shining through its distinctive red crest. It seemed to be posing for her, as things in nature so often do. She raised her serious 100-400 mm lens, camera and all, and framed the bird. I said a quick prayer and something broke in the camera, which had been working just fine with the Florida Scrub-jays in the morning. We had two theories. One, which turned out to be the case, was that there was something wrong with the batteries. Kim figured that out after the camera expert inside was stumped.
My theory, which I prefer in total disregard of the obvious validity of Kim’s solution, is that the bird was just too beautiful to be photographed and therefore suspended the camera’s operation just the way a sunset will make us hold our breath. We were as thrilled by the redness of the Northern Cardinal, a fairly common bird, as we were by the rarity of the Brown Booby.