The next phase of our series of Farewell Tours (which may continue for years) took us to St. George Island in Florida’s Panhandle for a weekend with Scott and Jaime, who took time off from busy Michigan schedules. Kim managed to take over 2500 photos, and when you add that to the ones I took, it’s over 2600. Because Kim is still working on her images, we are dividing our blog into two separate posts. 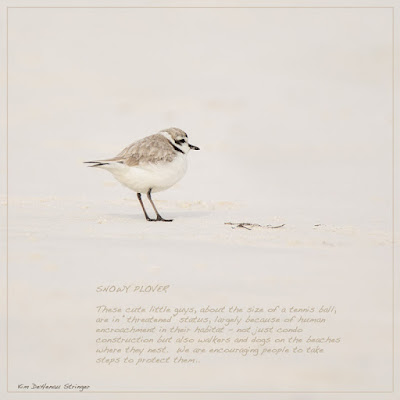 The Quest for Snowy Plovers

St. George Island had been devastated by recent hurricanes, with trees and buildings blown down and the beaches in some disarray. And the place we stayed was a bit dirty and uncomfortable. But we toughed it out, because we wanted to photograph Snowy Plovers.

Snowy Plovers are not to be confused with their St. George Island State Park beach-buddies. We call these shorebirds "peeps," although serious birders reserve that term for 5 kinds of sandpipers. I know this because I just looked it up.


To test your observational skills, explain how these peeps differ from Snowies.

Also seen on the beach

St. George Island has limited tourist attractions other than its beaches, but it does feature this lighthouse.


Originally built in 1852 on another island, in 2005 it succumbed to beach erosion and pounding waves, collapsing into the Gulf of Mexico. In 2008 the reconstructed lighthouse was opened to the public.

The nearest town, just over the bridge and causeway, is Apalachicola, a charming glimpse of Old Florida along what is sometimes called "The Forgotten Coast."

And of course, what beach gallery would not be complete without sunset shots.

Posted by dhstringer.com at 3:10 PM