Now that we are moving from two fully stocked homes into a 1400 square foot condo with limited closet space, it’s time to make some decisions about clothing.

The first step was easy – donate the junk clothes to Goodwill. This includes:

·      Items so worn or damaged that I was saving them for yardwork, which does not exist in a condo, and my diminished wardrobe will soon be worn enough.
·      Items so badly out of style that they may qualify as “vintage.” Come to think of it, I qualify as vintage.
·      Items that no longer fit. Surprising how clothes can shrink while hanging unused in the closet.
·      Duplicates. How many white dress shirts do I need any more? Though those wide collars are appealing . . ..
·      Items that I swear I never owned because I have not worn or thought about wearing them for years.
·      Highly floral neckties from the ‘70s.

Some of the above, as it turned out, bypassed Goodwill for the dumpster.

Kim suggested that I make the decision by putting together what she calls “outfits.” When pressed to explain, she says the term refers to pants, shirts and perhaps sweaters that “go” together. They may be the same color, but that’s too simple. No, certain colors “go” together and others don’t. I have learned to tell the difference by using a simple technique: To discover what items don’t “go” together, I walk out of the bedroom wearing an “outfit” that I think looks OK, and Kim sends me back with instructions. To discover what items do “go” together, I put on clothing that Kim has hung all on one hanger in my closet. It “goes together” because when I am wearing it Kim and I can go together out the front door.

On one of our drives to Traverse City Kim and I got to talking about clothes. Why do people dress the way they do? In my case, the criteria were simple:

Lots of negatives there. Invisibility was an unreachable goal, but a goal nonetheless.

Other people, we concluded, are pretty much always in costume. Lawyers are supposed to dress in lawyer costumes. If you want to look like a biker, dress the part. Hookers are supposed to dress like hookers (a lesson that appears to be lost on a few young people). Kim frequently makes a point about how important it is to “dress for success,” by which she means to wear the costume of the profession toward which you aspire. Want that job in a bank? Then lose the Pink Floyd t-shirt.

Change, as I’ve learned from psychology, can happen by working from the outside in. If you don’t think so, try putting on a costume – clown suit, tuxedo, military uniform, giant chicken – and, getting a bit into the role, see how it makes you feel. A lot of young people are searching for an identity, and that may mean coming up with a totally unique costume so you can “be yourself.” (We used to talk about “finding yourself,” but now it’s more like “creating yourself.”) Thus the purple hair and tattoos, which are not unique any more, but they allow you to group yourselves with other similarly costumed folks. Clothes, in other words, are the costume of your group, and they give you a feeling of affiliation, even if it’s with other rebels against mainstream culture. Or if you are a young girl who occasionally feels at odds with her family and disconnected from her former high school classmates, join a college sorority, lose the nose ring, adjust your make-up, and dress like them.

Which gets me back to the clothes I should put in my small condo closet. What kind of costumes do I want? Who do I want to become? I don’t think can pull off the Up North Paul Bunyan look, though I did successfully pronounce the plural of “bear” as “bear” in a conversation. No, I’ll settle for being a person who is not preppy (no problem with my sagging jeans – or is it genes?), warm enough (no problem in northern Michigan), already owns the needed clothes (except I need a warmer winter coat), not stupid (Kim will have to help me with that one, though I don’t entirely trust her sense of humor), and approaching invisibility.

The way I see it, the smaller my closet, the fewer ways I can screw up my “outfit.”

So, what costume do you wear, and what identity does it create? Email your answers to dstring@ix.netcom.com.


From Bob Knox:
I’m reminded of an article that appeared, I think, in “Esquire” magazine years ago. The piece was surveying sundry colleges for fashion or best-dressed tidbits, statistics on clothing expenditures, etc.  At Amherst  they quizzed one of our brotherhood (I can’t recall what year, but it was back in our era of all-male Amherst) and asked how many articles of clothing he had purchased in the last year.  He responded “that depends on whether you count socks as one or two.”  Just so; this greatly enhanced my pride in being an alumnus. It fits rather well with my memories, and probably yours, of loafers held together with duct tape and similar sartorial economies as part of the daily campus scene. 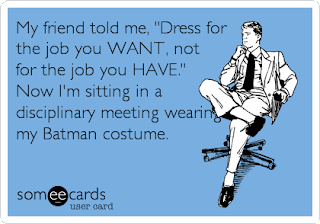 I think we have the same wardrobe genes.  If (a) pants colored khaki, (b) shirt colored blue, and (c) they're both from LL Bean (my personal haberdasher), then they go together.  Otherwise, beware.


My wife is always changing my shirts for reasons that bewilder me.  Women have the advantage in smelling, hearing, and seeing shades of colors. http://www.huffingtonpost.com/2012/09/04/men-women-vision-gender-study_n_1854660.htm.  Luckily for me my Filipino wife likes white flowers all year long - red at Valentine's day (easy).

We men have the advantage in seeing movement better.  May go back to male hunter and female gatherer theory.  Now there are corresponding genes for extra red being found on the X chromosome.  So almost every day I let her gather the right tee shirt replacing whatever I first choose.  [I await the gene for the tracking of visual movement being found on the smaller Y chromosome critter plus anything else they can call good.]

For those few of you that ever watched pole dancing in exotic countries, you might remember that movement was more important than color.  At least that is what I am told - as I am otherwise naive within this objectivization hobby.  When in exotic cities like Chiang Mai (they don't care how you spell it) Thailand, I was - instead - checking (just North of the city) occult Buddhist temple sayings.  The only movement nearby being peaceful men in long, orange, saffron robes.

Posted by dhstringer.com at 8:21 AM