Swans and the Cute Girl Waiver

When I was working at Starbucks in Gainesville I learned that two baristas, both guys, had been giving 10-cent discounts to women they found attractive. When the manager, Ashley, heard about this, the practice was abruptly discontinued. The Cute Girl Waiver was unacceptable.

In the condo next door to ours the resident, a cute girl, stored two bar stools and a small trampoline at the head of the staircase, which is also the emergency fire exit. This is in violation of condo rules and the Fire Code. I asked a Condo Board member whether she was eligible for a Cute Girl Waiver. Marsha’s firm “No!” started before I had finished asking my brief question.

One of the appeals of Traverse City is the opportunity to photograph new birds. We have not yet seen Snow Buntings or Snowy Owls, but we did add one to our life list (now standing at 411 species – but who’s really counting?): the Tundra Swan.


There’s an area of Boardman Lake a couple of miles from our condo where the water is not frozen over, and that’s where the birds tend to congregate. Lots of them.


Kim was able to capture three different swan species in a single shot. 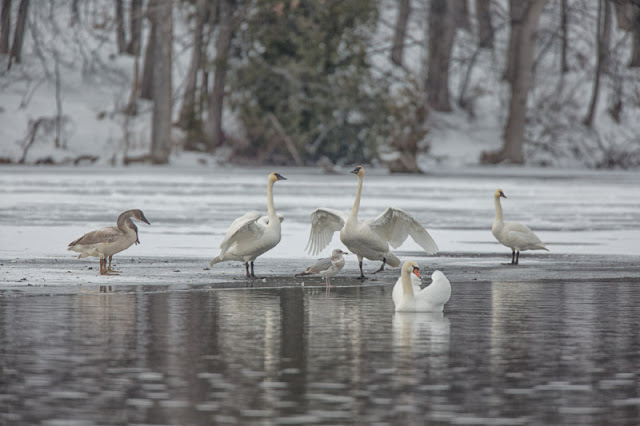 The Tundra Swan is the smallest one with the black bill, sometimes with a small yellow-orange area. The largest, identifiable by its orange bill, is the Mute Swan. They are not popular with birders. The Cornell University Ornithology Lab summarizes: “Mute Swans are not native to North America. Their aggressive behavior and voracious appetites often disturb local ecosystems, displace native species, and even pose a hazard to humans.” The State of Michigan has a program in place “to decrease this invasive population.” We watched them attack the native Trumpeter and Tundra Swans, targeting the juveniles.

Is it still possible to give the Cute Girl Waiver to Mute Swans, even while acknowledging their evil ways? The gender is hard to detect, but the potential waiver has the same basis: beauty. Even Cornell admits, perhaps grudgingly, “The exotic Mute Swan is the elegant bird of Russian ballets and European fairy tales. This swan swims with its long neck curved into an S and often holds its wings raised slightly above its back.” 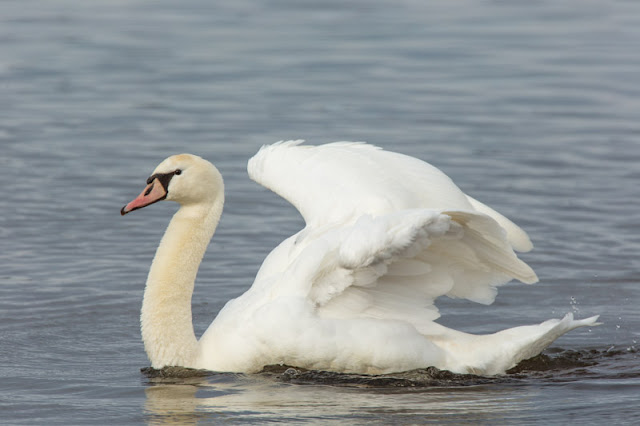 Yes, they are aggressive, destructive, and, like my ancestors, non-native. But they are so beautiful! 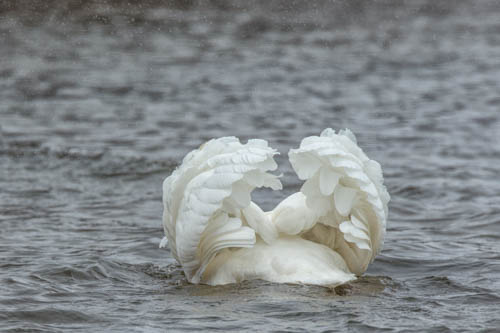 While I agree that we should “decrease” their population, part of me hopes a few of them will be around so we can photograph them. If our President can pardon a Thanksgiving turkey (no telling what Trump will do), then we can pardon a few Mute Swans.

The Cute Girl Waiver ain’t all bad. When Kim was in her early 20s she applied for an office job at a medical clinic. The doctor in charge told her they didn’t need any office help but they did need a nurse, so they hired her despite her protests that she had no training at all as a nurse. “We’re a hospital,” the doctor said, “so we can train you.” She ended up working as a nurse in the Emergency Room. (Attorneys reading this can back off – it was years ago and the clinic has closed.) Kim was good at her job, and she has used her nursing skills in several other jobs, including her work as a mother and a wife. I have no doubt that she was hired in large part because she earned a Cute Girl Waiver, and I’m grateful.


Opinions about swans or the Cute Girl Waiver? Let us know at dstring@ix.netcom.com.

(Guys - sorry I did not include any photos of cute girls. Some of you may have scrolled all the way to the end looking for them.)