Kim, as many have pointed out, is heroic. As a hero (I use the word for both genders and anyone in between or beyond), Kim’s journey is taking her on the path Joseph Campbell outlines in The Hero with a Thousand Faces, but of course she’s doing it in her own Kim-ish way.

Campbell describes “the Hero’s Journey,” a pattern that heroes typically follow in literature and, for some of us, in life. Wikipedia summarizes thus: “A hero ventures forth from the world of common day into a region of supernatural wonder: fabulous forces are there encountered and a decisive victory is won: the hero comes back from this mysterious adventure with the power to bestow boons on his fellow man.”

Further analysis sees the stages as: 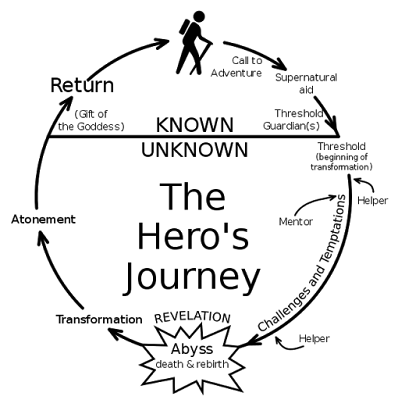 Kim has always responded to the Call to Adventure, whether fighting a bull in Spain, kayaking in Lake Superior, or marrying me (that last one is a joke). The latest call, of course, is her cancer diagnosis, and more recently, her discovery that it metastasized to her spine. There was no opportunity for Refusal, as the pain and the risks were so great, and I’m not sure about Supernatural Aid – lots of people said they were praying for her and it was a great comfort to know people were praying, but I’m not a believer in Divine Intervention unless the term means drawing strength from the highest powers within us. Whatever. Our doctors here in Traverse City are all great, but divine?

In any case, she crossed that First Threshold to become a cancer warrior. It actually feels like we have crossed it several times, as we believed that each treatment defeated the cancer so we could resume our normal pre-cancer lives. Not so.

Living in the Belly of the Whale means living in the new Reality, with your previous “ordinary” life left behind. We often feel that way with cancer, and cancer treatment, and cancer future, looming. But this stage is early in the journey.

The Road of Trials is easy to see, with surgery and radiation the most difficult, followed by eating my cooking.

The Meeting with the Goddess? Campbell describes this divinity as “the Queen Goddess of the World,” which I take to mean the epitome of those qualities that women have but men, unfortunately, typically lack. Campbell talks about a mystical marriage, and he says this goddess is “incarnate in every woman.” We called upon this goddess by Kim’s wearing her Wonder Woman bracelet through her radiation treatments, and I am delighted to say that a number of Kim’s goddess-friends have stepped forward, each in her own way, to join with Kim.

The Temptress does not have to be a woman. It’s any kind of temptation that could lead away from the heroic quest. Perhaps wine, which does not mix well with Kim’s chemo, is such a temptation. Chocolate?

By “Atonement with the Father” Campbell refers to the hero’s confrontation with whatever has the most power – traditionally some form of “Father.” The confrontation, Campbell says, leaves the hero “ripe to understand how the sickening and insane tragedies of this vast and ruthless cosmos are completely validated in the majesty of Being.” That may sound like BS, or it may sound like a religious experience. In Kim’s case, I think it’s her ongoing confrontation with nature (Mother Nature) that creates something like “validation,” though I would not use that term, for her love of nature does not validate the obscenity of her cancer. Atonement is a work in progress.

If and when it happens, the hero will reach the next stage, Apotheosis, which Campbell sees as the understanding that the Everlasting dwells within us and within all things, including “in the groves of the wish fulfilling trees.” Kim and I spend as much time in those trees as we can, and our cottage will give us even more wish fulfillment.

The Ultimate Boon is the achievement of the goal of the quest. I’m not sure what the goal of the quest is, though it might be worth our time to figure it out. This strage often involves an elixir, a “miraculous energy substance.” So far, we have been working with Ibrance, a chemo from Pfizer, and a mushroom extract from our holistic doctor. Not yet miraculous, and the chemo does have side effects, but we’ll see . . ..

Time to skip ahead here to the final step, Freedom to Live. This means, as I understand it, the freedom from fear of death, which translates as a freedom to live. How? By living in the moment, neither anticipating the future nor regretting the past. Our hero, Kim, reaches this point from time to time – several times this week, in fact, and just this morning. Freedom to Live? It’s more than her “strength,” and more than having “a good attitude.” She has both, in abundance, but there is something both more spiritual and more grounded going on within her to make her free to live fully in what I call “the dailyness of life.”

Campbell emphasizes that “the hero comes back from this mysterious adventure with the power to bestow boons on his fellow man.” Those “boons” are more than the scones she continues to bake. She has a way of lifting those of us who know and love her, and that makes her heroic.

When I showed a draft of this entry to Kim, she said, “I’m not a hero – I don’t think of myself that way. What I do is get out of my head and keep busy. Genne’ is the real hero.”

Posted by dhstringer.com at 9:03 AM