One would think that in Northern Michigan winters, work moves indoors – activities like knitting, cooking soup, clock repair, and maybe some interior painting. By “work,” of course, I don’t mean what I do as a writer, where the results are less than tangible. I mean real work. Plowing or shoveling snow, or splitting logs for the fire are needed for survival, but other work goes on as well, regardless of winter weather.

My appreciation of winter work up north changed when Kim and I visited our under-construction cottage. The temperature outside was 26 degrees, so we had on our long johns, scarves, knit hats and insulated boots. To be safe, I wore two pair of socks and 5 layers of clothes on my torso. We anticipated an hour or two, walking through the house with our builder and electrician to locate light switches, plugs, ceiling lights, etc.

When we arrived, we learned that the temperature inside was also 26 degrees. Nevertheless, there were maybe a dozen people – our builder’s crew plus plumbers, electricians, HVAC guys – all working as if it were a cool spring day. Most of them wore only hoodies. None wore gloves, let alone Arctic mittens like mine. Yes, they were busy working, and that generated some heat, but not much. I don’t think a nail gun gives off much heat, and I did not see anyone gathered around the plumber’s torch to warm their hands. No, these were simply tougher guys than I am. Perhaps my thin Florida blood will adjust in future winters, but it has not adjusted yet.

The next day Kim looked out the window of our condo and saw guys working high in the trees, trimming off dead branches. (We soon learned that this was only part of what they were doing.) Kim, of course, grabbed her camera. It’s hard to estimate how high up these guys were working, but we were looking up at them from our third-floor condo window. 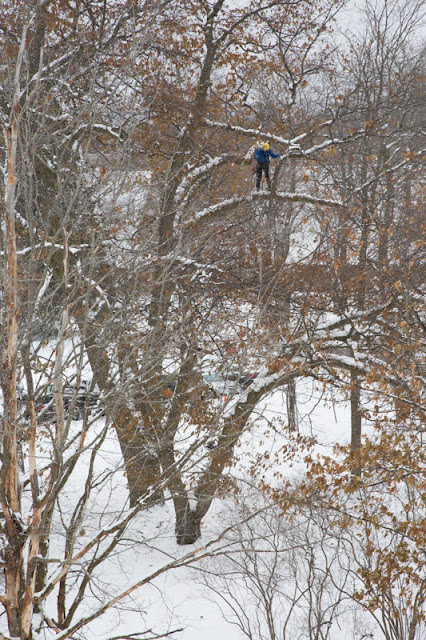 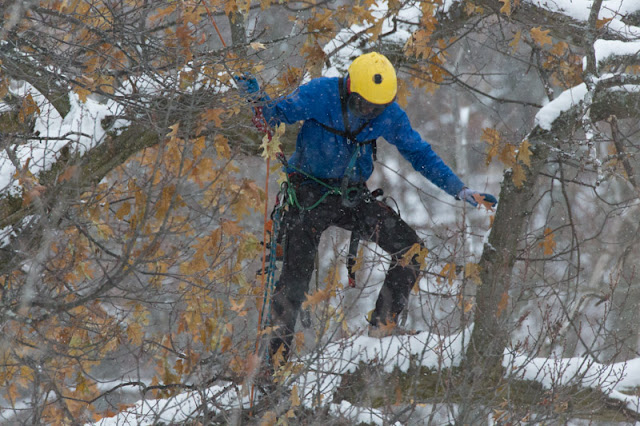 And then we grabbed our boots, scarves, etc., and headed outside. The temperature had warmed to 27, which was not enough to melt the ice and snow off the high branches. I was pleased to learn that these guys were not all guys. Kim was even more pleased because I had made a comment about the all-male crew working on our cottage. 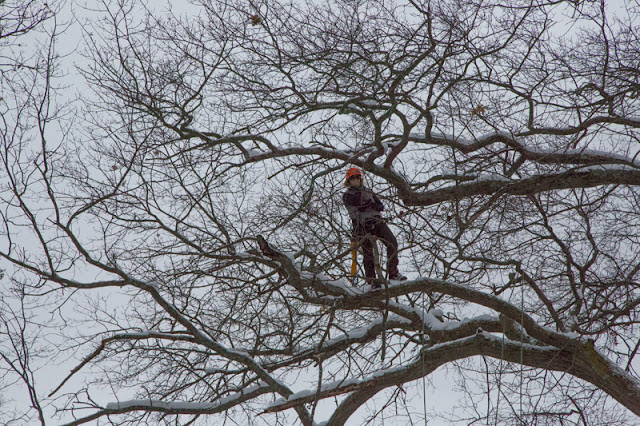 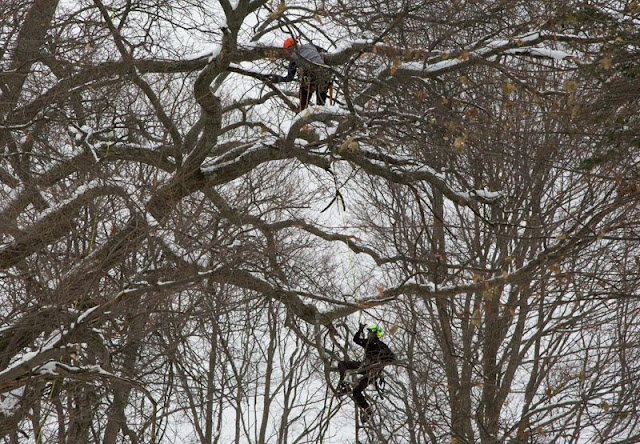 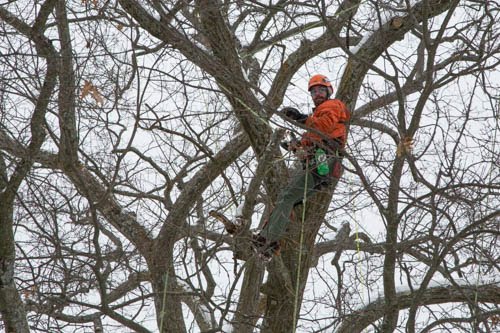 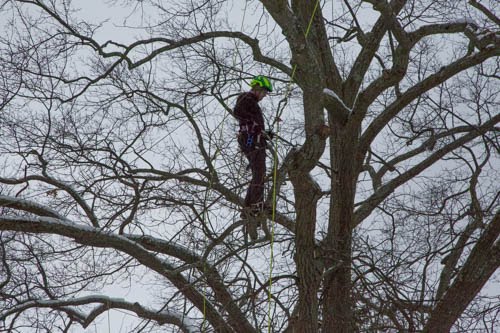 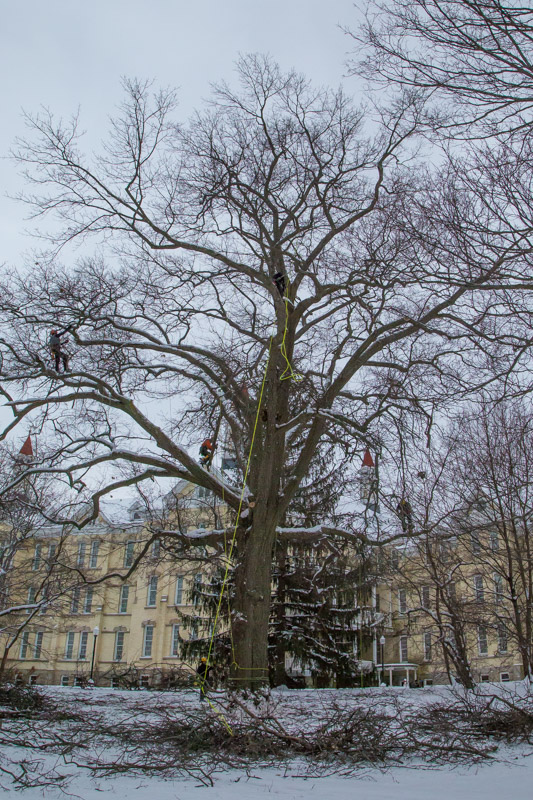 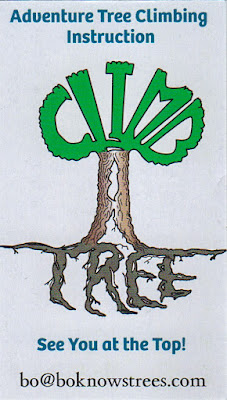 My shy wife got to talking with them, and it turns out that they were not just trimming trees. They were also preparing the trees for a tree-climbing competition to be held a few yards from where we live. The competition had several categories, including climbing with ropes and some sort of rescue exercise. 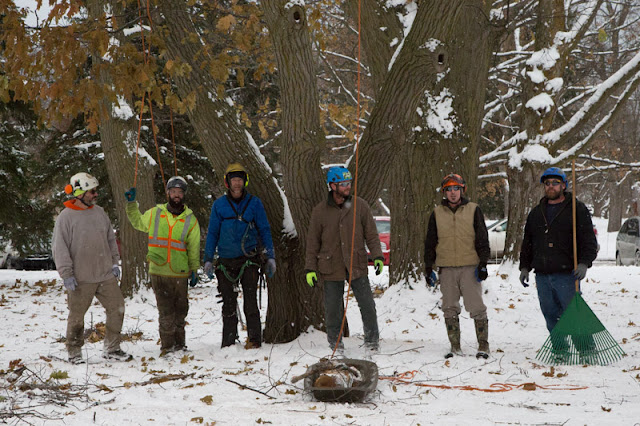 They weren’t just working – they were having fun in anticipation of more fun. That’s a good attitude – one I need to work on.

We lingered a while to take more pictures. I was getting cold. Kim was not complaining, and she’s the one with medical issues.

Our builder called to ask us to activate the gas line so he could turn on some heat in the house. I told him I’d do it as colder weather was coming – down to 8 degrees. He said he would leave it off until the drywallers came in next month, so he and his crew would be working in the cold. Tough guys. I bet that they all have beards.


We need to toughen up. In February we are going to Sault Ste. Marie (aka “The Soo”) to find and photograph winter birds. Our destination is in Michigan’s Upper Peninsula, about 200 miles north of where we live. Any of our Florida friends care to join us?
Posted by dhstringer.com at 6:41 AM