“Best wishes for a joyful and meaningful holiday weekend, whichever one you celebrate.”
--Rabbi Peter J. Rubinstein, in an email

To this non-religious observer, Easter Sunday and Passover share a spirit of renewal, of re-emergence. No coincidence, I suspect, that these holidays occur in Spring, when the earth is renewing itself. It was time for another renewal, and Kim and I got into the spirit of Passover, Easter and Spring by liberating ourselves from our condo and our homebuilding concerns to drive north to Mackinaw City to photograph the blue ice. Spring apparently did not get the Renewal Memo – high of 25 on Easter, with 8-12 inches of snow in the forecast for Tuesday. This may be because Sunday was also April Fool’s Day, a holiday of sorts.


We were there to see the ice formations that pile up where Lake Michigan flows into Lake Huron. 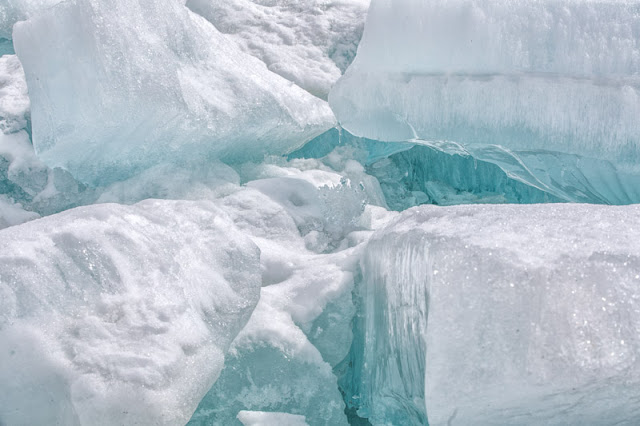 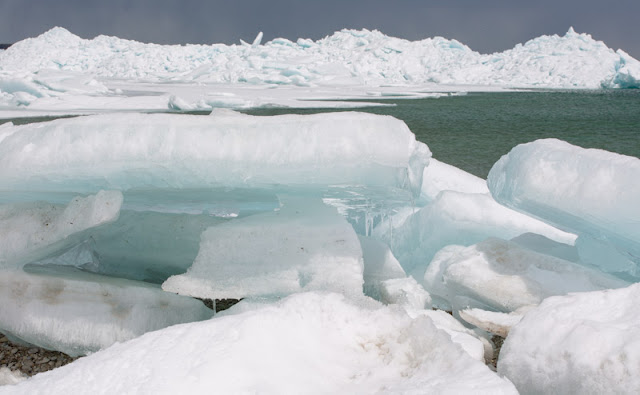 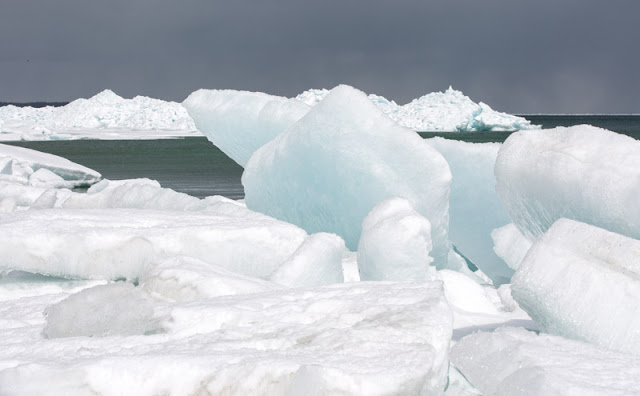 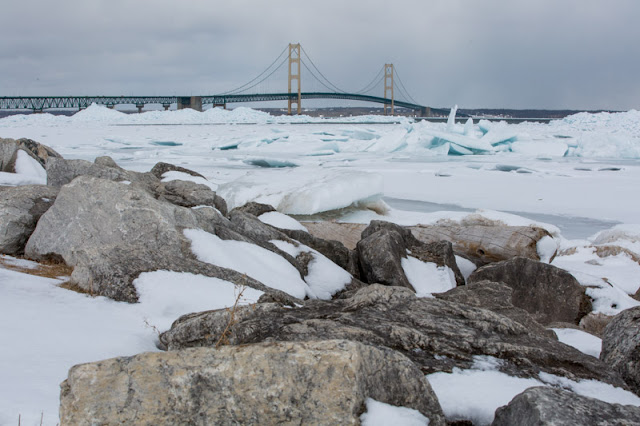 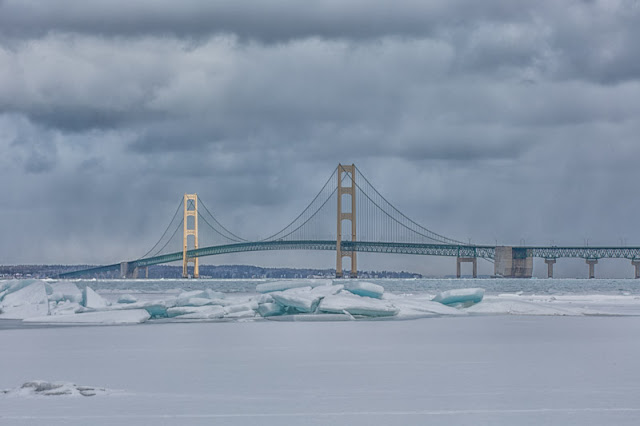 George Leshkevich, physical scientist emeritus at National Oceanic and Atmospheric Administration's Great Lakes Environmental Research Laboratory, explains that blue ice happens "because of three processes. One is that water absorbs other colors of the spectrum, the second is the lack of bubbles in the ice, the third is the ice thickness and density. And they're all factors in what causes this phenomenon." Through the process of selective absorption, the water absorbs blue wavelengths, and the lack of bubbles in the ice allows the wavelength to penetrate further. Light reflected from the ice then appears blue.

My apologies to George Leshkevich. To a solid-state physicist, the blue-ness of ice is a very interesting phenomenon. We solid-state people think of ice as an “insulator” – meaning that it doesn’t conduct electricity. Like NaCl salt, or SiO2 quartz, most good insulators have a big “gap” in the optical spectrum. This is a range of wavelengths or frequencies where basically nothing happens – visible light is not absorbed. Visible light is (not just for us) in the “middle” of the spectrum, between infrared (low frequencies) and ultraviolet (high frequencies). Most matter absorbs light well if it is ultraviolet (electrons absorb light and move to higher energy levels) or infrared (molecular vibrations absorb light and heat up the material). It is no accident that our eyes and brains use the “visible” part of the spectrum – this is the range where light travels most freely. “Dyes” in our clothing and our retinas are designed to absorb efficiently in the visible range where ice, salt, glass, water, air, etc. don’t absorb much.
Here is what’s unusual. Ice (H2O), because of the lightweight hydrogen atoms, has higher frequency molecular vibrations than most matter. It absorbs infrared light efficiently, and at frequencies closer to visible than most matter. These vibrations “resonate” with light when the light frequency is about 5 times lower than the frequencies of visible light. But just like sound waves in musical instruments, higher “harmonics” of these molecular resonances can also be excited by light. It turns out that the 4th harmonic of the strong high frequency molecular resonances in ice (also in water vapor and liquid) is weakly absorbed by light at the low frequency (red) end of the visible spectrum. So when visible light travels through ice (or water), it gets depleted of red. This happens only over significant distances, like a foot or more. When visible (“white”) light gets depleted of red, it is bluish.
The reason this is interesting to people like me is that it’s a weak effect, one that we normally don’t think about. The color of matter (an important issue for people like me) has, for most matter, nothing to do with molecular vibrations. Therefore it is quite a surprise when we learn that it happens for ice (and water).
There is a wonderful article by Braun (a chemist at Dartmouth) and Smirnov in the Journal of Chemical Education, "Why is Water Blue." There are so many plausible but incorrect explanations, that they decided a proof of this “4th harmonic” explanation would have some value. They did it by purchasing a tank of “heavy water” where the H (hydrogen) atoms are replaced by D (deuterium, twice as heavy). This moves the resonances to lower frequency where the 4th harmonic is in the invisible infrared. Heavy water isn’t blue.

PS – So now you should ask, why is the sky blue? And why red at sunset? It’s a totally different story, explained by John Strutt (later known as Lord Rayleigh) in 1871. The story above for ice and water comes from 20th century research.

Posted by dhstringer.com at 5:37 AM