In soccer there is a thing called “Injury Time,” where the referee adds a few minutes to the end of the game to allow for time when play stopped for an injured player, though the clock kept running. Injury Time often leads to more intense action on the field. Kim and I feel like we are playing in Injury Time, and we want to make the most of it.

In the next week or so Kim will have a bunch of tests – CT Scan, bone scan, X-rays, and blood tests - on top of her regular infusions, butt-shots, and chemo. These are all routine, every month or two or three, not because of any new symptoms. But they all hit this week, and it’s hard not to be anxious about what those results might be and what future they might suggest. After all, no matter how well Kim feels (good, except for ongoing back pain and fatigue), her cancer is Stage 4. I’m imagining, and trying not to imagine, further treatment, hospitalization, more pain, tears, and worse: our curtailed lives.

At the same time, we are going ahead with what we hope will be the last month of home construction, which projects us into a future where we both are healthy and strong. We are going ahead with our very ambitious project AS IF we were younger and not awaiting the return of cancer or whatever surprises will hit us as the years roll over us.
·      I will haul box after box from our storage facility.
·     Kim will unpack everything and put it away.
·      I will move furniture and haul rocks around our yard until it appears that a glacier dropped them there.
·     Kim will pull up weeds, water the wildflower garden and supervise my rockdropping before going in to cook my dinner in our new kitchen.
·     When we relax we will enjoy a cocktail on the deck, looking east and wondering where the sunset is.

We are playing in Injury Time. Kim’s major surgery was a little more than a year ago, and since the anniversary of that day in March Kim has often pointed out all the cool things we have done that we might have missed out on had she died. Just about every morning we greet each other thinking, and often saying, “We have ourselves another day – a gift!”

Yesterday, for example, on the way home from doing some yardwork at our cottage, we pulled off the road to photograph fields and orchards. 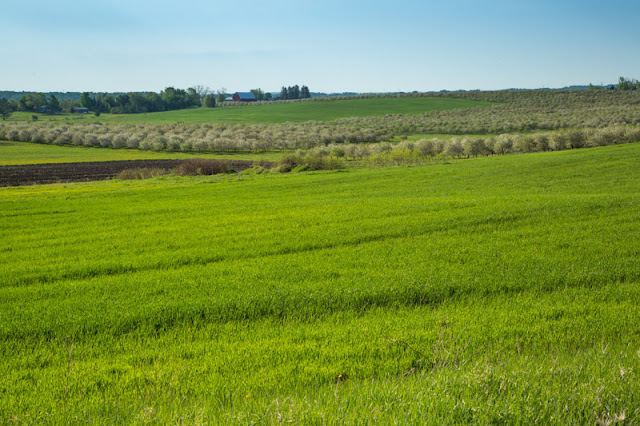 We saw that we had pulled into the driveway of a property owned by the local Nature Conservancy. We were both tired, but we decided to explore. The trail went down through a beautiful woods to the shore of Lake Michigan. What we saw along the way, and Kim photographed, shows how a tiny world – these butterflies the size of a fingernail – can be more than enough. Each is a gift.

William Blake got it right:


Yes, we are playing in Injury Time, and the game is sweeter because of that. We are hoping it lasts for years.

Posted by dhstringer.com at 6:30 AM