Kim and I are building a path. The construction of our cottage has just about stopped, for a variety of reasons – can’t get a painter, builder’s vacations, his working three other jobs instead of ours, bad weather in April, etc., etc. Our builder removed the crumbling concrete steps down to the lake in April as part of a drainage plan. He has not replaced them, and now he suggests we might find someone else to build new stairs. We probably should have paid more attention to the name of the builder’s company: “Godot Construction.” We are still waiting. (English major joke – sorry.)

The steep hill is too much for Kim’s fragile post-surgical back, so for a couple of weeks we used our neighbor’s stairs, but they are returning from California any day now. A landscaper, Mona, suggested we build a switchback path down the hill. She said the two of us could do it in maybe half a day. Mona was mistaken.

She said we could just turn over an inch or so of dirt, wind down the hill, throw on some shredded cedar, and we would have our switchback path. Mona did not know how Kim does things.

Under that inch or so of dirt are roots that go down about a foot – crown vetch, Virginia creeper, yucca, plus wandering roots from the pine, oak, birch and maple on the hillside. We turn over one shovelful at a time, shake the dirt off the roots the best we can, and put them in yard bags. We have filled more than twenty bags to haul up the hill to the car. We also hauled rocks down to dig into the sides of the path to keep the whole thing from sliding into the lake. Some of the rocks we turned into steps to keep us from sliding into the lake. We are adding cedar mulch and tramping it down. 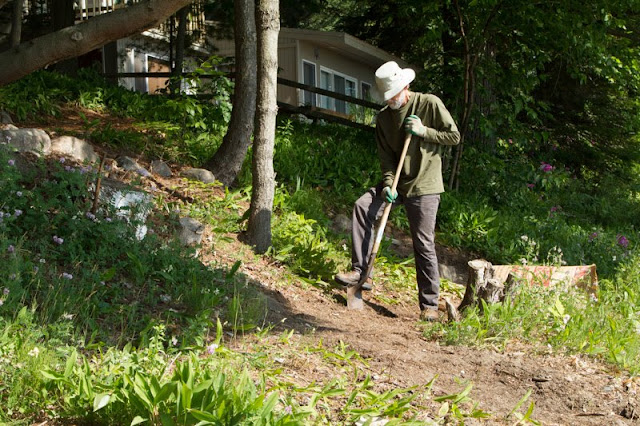 There is a pleasure in doing what we are doing. With construction not progressing, we are pleased to be doing something constructive where we can see our progress. Kim uses her engineering/artistic brain to design the rockwork and steps where we need them, and she provides quality control. I’m pretty much responsible for grunt-work with the shovel, rocks and heavy bags, and I try, unsuccessfully, to keep Kim from overdoing it. Together, we are making something happen. The house has been unchanged for weeks, but the path has grown.

Part of our pleasure is in connecting to our future home. We are breathing our air, and our sweat is going into our soil – especially when the temperature reaches the mid-90s. Our path works its way under our fingernails, and our mosquitoes are sampling our blood.

There is a discredited theory about labyrinths in the Middle Ages. For those unable to take a pilgrimage to the Holy Land, some cathedrals laid out a labyrinth on the floor, and pilgrims would trace the labyrinthian path to achieve a Lite version of whatever holy state that the real pilgrimages were supposed to generate. Working on our switchback path generates a similar holy state – if you take the term “holy” loosely. Of course, Kim and I do not walk on our knees as our Medieval predecessors did, though we do stagger from time to time. And we do not pray as we work – at least, not verbally. Wikipedia defines prayer as “an invocation or act that seeks to activate a rapport with an object of worship.” Our act of constructing our path is certainly creating a rapport with our land – the dirt, rocks, plants, air and cedar to connect the lake with our home-to-be at the head of the path. Feels holy to us. 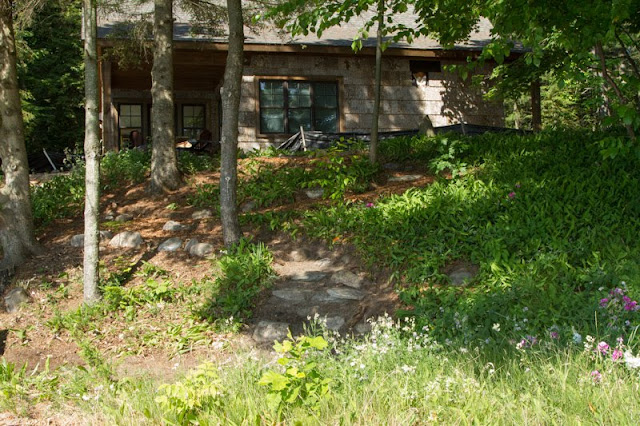 Posted by dhstringer.com at 6:35 AM