Kim was recovering from her cancer surgery – her seventh in the last three years and by far the most serious because her breast cancer had metastasized to her spine. Paralysis, or even death, were possibilities. And in the best case she would survive the 7-hour surgery to live with stage 4 cancer. This is not a situation where most people would say, “Hey, let’s build a house!” We are not most people. 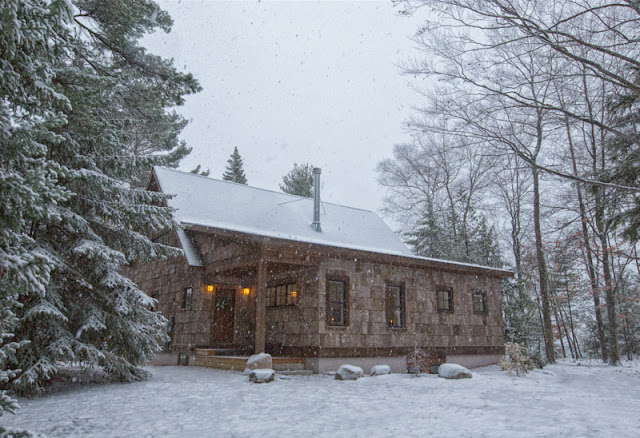 Kim had been through a lot – double mastectomy, radiation, uterine cancer surgery with more radiation. We thought, after finishing her uterine radiation, that we were pretty much in the clear. We had finally sold our snowbird homes in North Florida and Southeast Michigan and decided to move to Traverse City. We found a piece of land that reminded Kim of where she spent summers in the Upper Peninsula, bought it in October of 2016, and decided to build. We met with a couple of architects and builders before fully launching into the project.

In March of 2017 we drove to visit Genne’ in Florida and pick up a sculpture that we did not trust with the movers. On the drive down Kim experienced severe back pain. At this point we were unaware that the cancer had metasticized. Genne’ showed her mom some stretches that might help, and she encouraged an X-Ray, which did not reveal any problem to the person reading it. Meanwhile, Kim took a bad fall in a dark bedroom, landing hard on the floor. Miraculously, there was no permanent damage.

The pain continued so we decided to head north early. It was unrelenting. We went to our doc when we got home, Kim had a CT-Scan, and her radiologist called and told her not to move or do ANYTHING, that he was scheduling her for surgery as soon as possible. On May 9, 2017, she had cancer removed from her spine. As it turned out, the cancer had eaten her vertebrae and was, in fact, what was supporting her spinal cord. The surgeon constructed a cage out of titanium, bone, and whatever else he could find. A few weeks later she started a month of almost daily radiation, followed by chemo. Sounds like a great time to build a house, right?

We debated, back and forth, whether to go ahead with the project. The reasons not to do so were obvious: the stress, the financial and physical demands, the remoteness (an hour from the hospital), the possibility of being snowed in, and the challenges of living in and taking care of a home in the woods, especially when compared to condo living.

It was Scott who finally convinced us to go ahead with our building. “You’ve always wanted to live on a lake. It’s your dream. Do it.” He gave her a kayak for Mother’s Day, shortly after she returned home to the condo from the rehab facility.

Anyone who has built a home knows how the process usually goes – the delays, the errors and corrections, the expense. But despite all of that, it was a creative experience. Kim is an artist, and our home is her continuing work of art. 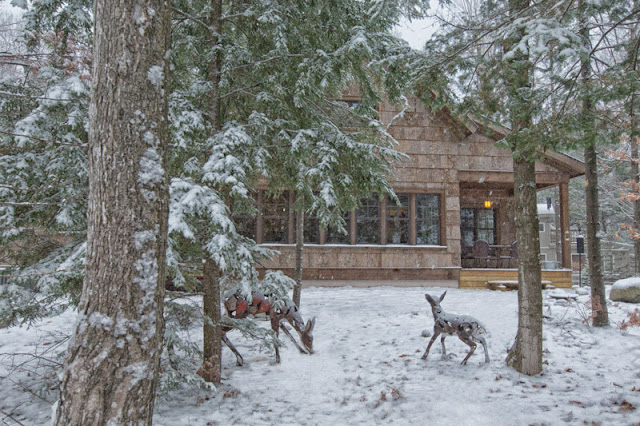 This is our bark house. The exterior siding is made from the bark of tulip poplars from a company in North Carolina where we had stopped on one of our snowbird drives. The birds and squirrels think our home is a large tree, and they may be right. Kim and I have always been tree-huggers, and now our tree is hugging us.

One of our favorite songs is “Somewhere Over the Rainbow,” with the words, “And dreams that you dare to dream / Really do come true.” The dream was to sit on our porch in the evening, sipping our bourbon, watching the snow fall, noticing the deer in the yard.

And here we are. The cancer is still stage 4, we have more scans and tests coming up next weeks.