This week, while I was pulling up my pants, I saw a large eagle land in a tree just outside our bathroom window. It was grasping a large fish, gashed open on its flank. I ran to call for Kim to see it, effectively scaring it away.

That evening we switched off the television to sit on our sun porch (heated) to enjoy some grapes and cheese. I saw a large deer approach the cracked corn and potato skins that we had set out for them. Kim told me she thought it was pregnant, and she advised me not to move at all. I didn’t, and a few minutes later, two more deer appeared – a small doe and a young buck sporting spikes. Kim had seen deer there before, but only when her sleeping problems had her up and looking at 5 a.m. Seeing them at 10 p.m. saved me from an early wake-up.

Thrilling it is, but what’s the thrill?

We have been watching birds at the feeders for months now, and we've been birders and bird photographers for several years, but this was somehow different. Birding puts us in touch with nature, and except for our shots at our feeders, it takes us out into nature. But the birds at our feeders – the chickadees, juncos, nuthatches, woodpeckers – have become members of our family. We take meals together, separated only by a bit of glass. Family.

The eagle and the deer are different. They are part of The Other.

(My thoughts here are under the influence of The Overstory by Richard Powers, a marvelous novel.)


We live in an enclosed world – our houses, our cities, our friends and families, pets and livestock and gardens. Cars, smart phones and the Internet. It’s a human-centered world that we have dominated, tamed and domesticated. As Powers shows, we are in the process of making our whole planet subservient to what we see as our human “needs.” Every once in a while, however, we glimpse The Other – the larger, wilder, more mysterious and majestic world beyond our humanscape. For Powers, it’s the community of trees that comprise our disappearing forests. For us, we see an eagle with a fish. We see deer – though we may be domesticating them by feeding them. In whatever form it takes -- and there is a flash that makes us realize that there is indeed something larger than the web of civilization we have created. That’s the thrill. For some, it can be a religious thrill.


Sometimes we see The Other in a beautiful detail going about life oblivious to us.

Sandhill Cranes were doing their thing long before our self-important human drama. 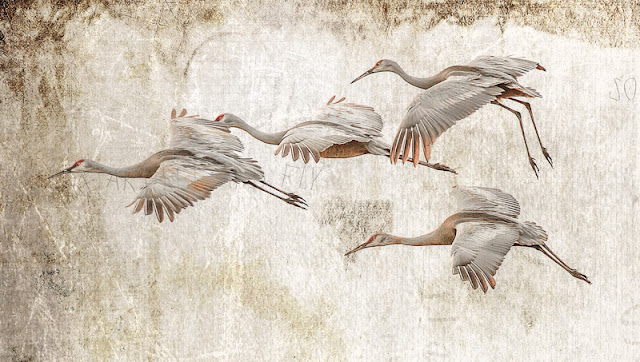 Some we saw just dealing with the daily struggle of existence.

At the same time, however, I realize that the Other is not really Other. We are part of that world, despite all of our artifice. It’s only a matter of looking, listening, appreciating. Photography is just one way to make that connection.

Dave:  Janice and I live in suburban NJ, only 7 miles from the George Washington Bridge, but we too are awed by the frequent deer families which come through our yard, and especially of the reaction of our Golden Retrievers, who sit and stare at them without chasing or barking.   The dogs are a little harder on the bunnies during the warm weather.  In addition to all the little birds, we have wild turkeys and across the street, several huge turkey vultures who hang out near the top of the chimney of the church.  We only feed the small birds at our feeders, but the others seem to find enough to eat themselves.  There is something satisfying about the sense that all these creatures live here with us and don't seem too afraid.

Posted by dhstringer.com at 8:52 AM

Email ThisBlogThis!Share to TwitterShare to FacebookShare to Pinterest
Labels: photography