Lately I’ve been thinking about the fall of Icarus. The myth is usually taken as a lesson about the danger of flying too high, as the sun will melt the wax holding your wings together, and down you go. Moderation is best.

But there are other ways to see the story. First, Pieter Brueghel’s The Fall of Icarus: 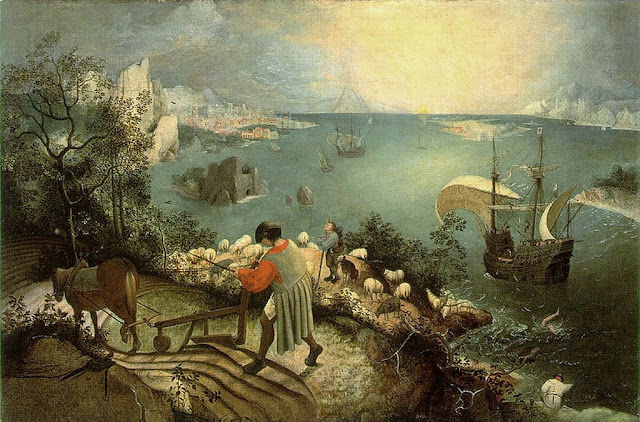 (You can see the legs of Icarus just below the stern of the ship.)

Auden’s take on the painting:

About suffering they were never wrong,
The old Masters: how well they understood
Its human position: how it takes place
While someone else is eating or opening a window or just walking dully along;
How, when the aged are reverently, passionately waiting
For the miraculous birth, there always must be
Children who did not specially want it to happen, skating
On a pond at the edge of the wood:
They never forgot
That even the dreadful martyrdom must run its course
Anyhow in a corner, some untidy spot
Where the dogs go on with their doggy life and the torturer's horse
Scratches its innocent behind on a tree.
In Breughel's Icarus, for instance: how everything turns away
Quite leisurely from the disaster; the ploughman may
Have heard the splash, the forsaken cry,
But for him it was not an important failure; the sun shone
As it had to on the white legs disappearing into the green
Water, and the expensive delicate ship that must have seen
Something amazing, a boy falling out of the sky,
Had somewhere to get to and sailed calmly on.

Our suffering, even our death, takes place, for the most part, unnoticed: “how everything turns away.”

And from William Carlos Williams:

Landscape with the Fall of Icarus

According to Brueghel
when Icarus fell
it was spring

a farmer was ploughing
his field
the whole pageantry

of the year was
awake tingling
near

the edge of the sea
concerned
with itself

sweating in the sun
that melted
the wings' wax

unsignificantly
off the coast
there was

a splash quite unnoticed
this was
Icarus drowning

The landscape is “concerned / with itself.” Not us.

But then there is this, from Jack Gilbert:

Everyone forgets that Icarus also flew.
It's the same when love comes to an end,
or the marriage fails and people say
they knew it was a mistake, that everybody
said it would never work. That she was
old enough to know better. But anything
worth doing is worth doing badly.
Like being there by that summer ocean
on the other side of the island while
love was fading out of her, the stars
burning so extravagantly those nights that
anyone could tell you they would never last.
Every morning she was asleep in my bed
like a visitation, the gentleness in her
like antelope standing in the dawn mist.
Each afternoon I watched her coming back
through the hot stony field after swimming,
the sea light behind her and the huge sky
on the other side of that. Listened to her
while we ate lunch. How can they say
the marriage failed? Like the people who
came back from Provence (when it was Provence)
and said it was pretty but the food was greasy.
I believe Icarus was not failing as he fell,
but just coming to the end of his triumph.

I sent this poem to a recently divorced friend. He said it didn’t help. But it’s not about marriage and divorce – like the other two poems, it’s about how we see our endings. Everything will “turn away,” and the world, natural and human, is “concerned / with itself.”

None of this, however, diminishes the triumph. The challenge is to identify and appreciate our triumphs.

I showed a draft of this post to Kim. “Shit happens,” she said. “Get over it.”

Wow! I thought I was tired, but I wanted to check e-mails before getting ready for bed.  This removed all traces of weariness from my brain, if not my body. "Musee des Beaux Arts" has always been a favorite, and the other Icarus themed poems were a treat, especially "Failing and Flying."  Most of all I liked your idea of the challenge being to appreciate our triumphs.  That started a little waterfall of ideas.  First i thought of Edna St. Vincent Millay"s words, "My candle burneth at both ends -- it will not last the night.  But oh, my friends and ah, my foes, it gives a lovely light."  Then I thought of Sara Teasdale's words: "...for one white, singing hour of peace count many a moment of strife well lost."  Then I thought of the agonizing pain of the end of a relationship that you don't want to end.  As bad as it feels you wouldn't for a moment choose not to have had the glorious moments.  Last (so far), regarding the way we just move on, i thought of the Seinfield episode where George's fiancee dies from licking the cheap wedding invitation envelopes George bought.  Jerry, George, Kramer and Elaine say a few polite words as they walk out of the hospital, then one of them looks at his/her watch and says, "Let's go get something to eat!"  Everyone responds with enthusiasm.  Please excuse my unwillingness to look up spelling/punctuation.  I had only enough energy to get the thoughts down.  Thanks for the wake-up!

Posted by dhstringer.com at 7:03 AM