We are having a stretch of cold weather. Last night when I went to bed it was 4 degrees, down from a high of 14. This is what we signed up for in Northern Michigan. Tonight’s forecast wind chill is -20 degrees.

I venture out into the cold for short periods. I feed the birds, many of whom are not wearing hats and coats. I sweep snow off the porches so Kim and I don’t fall on our asses if the snow turns to ice. I split some firewood. The walk out to the garage with stuff to take to the recycling center is quick and painless if I walk quickly.

The cold hits my exposed skin first – my cheeks if there is wind and I have not covered them. My eyes water. When I remove my mittens to load the bird feeders, my hands almost instantly turn white and start to ache. I come inside and warm my hands on my coffee cup.

Our friend Don worked as a volunteer fireman up here for forty years. He described some harrowing rescues from the water in winter. It doesn’t take long for your body to go completely numb, your limbs and then organs shutting down. One guy he rescued was encased in ice, hugging a tree. If cold, as physics tells us, is a lack of molecular motion, then that guy was really cold! Don’s stories will limit my skating on the lake when it freezes over.

This may sound hard, but it’s not. Winter makes me feel alive. While I was warming my hands, Kim went out into the cold to photograph the sunlight on the lake. 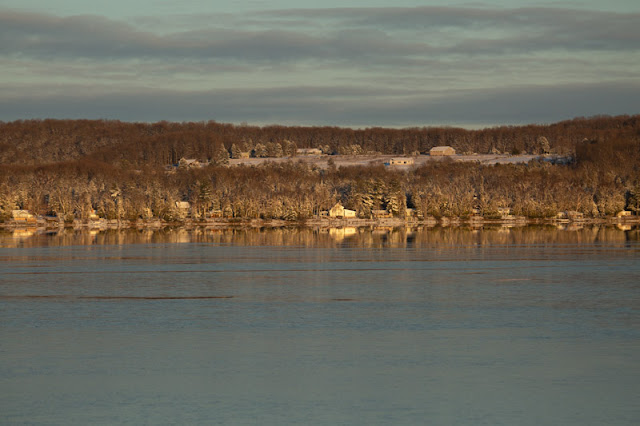 Twice. So we are alive and kicking, even with the cold. And we can always retreat into hibernation mode, which we very much enjoy – naps, movies, phone calls, hugs.

Being cold is not the same as being cool. I did an article a few years ago comparing the old Ann Arbor High School, closed fifty years ago, with the two newer high schools. Among other things, I learned that the word “cool” still was a signal of high praise, unlike “sick” and “dope,” which changed from negative to positive (which I find a bit sick). Cool.

Cool, I believe, was originally associated with jazz, where “cool jazz” – understated, from the West Coast – was distinguished from “hot jazz” originating in New Orleans. “Cool” became a term of approval that reflected back on the person perceptive enough to appreciate what was understated, less openly emotional. When you pronounce something as “cool,” you are required to do so in a cool, unemotional, understated manner. Hipsters snap their fingers instead of applauding.

“Cold” is also an emotional state, signifying, of course, a lack of warmth, which I take to mean compassion, or perhaps passion itself. It’s uncool to be cold, unless you are, perhaps, working as a surgeon, an assassin, or an accountant. Sometimes it’s cool to be cold. But usually not.

At this point we can go back to physics. On a cold January morning I can do what physics tells me to do, creating warmth by putting my molecules in motion. Or there’s always hibernation, like old bears.

Posted by dhstringer.com at 7:58 AM