It might have been comical. Kim could laugh at it, even with the pain.

It was a sunny winter day, and we took a break from our isolation to load our camera gear in the car for a drive out in the country to photograph barns, trees, birds – whatever we could find. We allowed ourselves to become somewhat lost, thanks to Gertrude, the name we’ve given the voice on our GPS.

Kim spotted an old barn, and we crept a little past it so she could get a good angle from beside the road. She got out of the car, and since she did not have far to walk, I stayed in, the engine running. Snow had been plowed off the road, but there was a nice crust to walk on. Or so she thought. She took a step to move some branches out of the way, and her foot plunged down through the snow until she was in over her knee. She took a step with her other foot, and this leg sunk just as deep. She reached a hand down to get leverage to lift that foot out and – you guessed it – that hand went down over her elbow. She was stuck.

Fortunately, or so she thought, she had one hand free to wave to me for help. I was doing something important, and so I didn’t notice for a while. When I finally did see her waving, I smiled and waved back to her. I saw her twisting about, trying, I thought, to get a good angle for the photo. I was, as is so often the case, mistaken.

I finally heard her screaming for help, and I figured that I should probably help her. I waded into the snow pile, lifted her under her arms, and helped her back to the car. Kim was so delighted to be rescued that she did not, at first, notice that all of her twisting to free herself had injured her knee. “I wonder,” she said, “how long I would have stayed there if you had not pulled me out.”

At this point, about a week later, we don’t know how serious the injury is. Some days it seems to be getting better, but most days not. Some days she can go upstairs fine, and some days she can only lift one leg. Going down stairs is worse.

Genne’ suggested over the phone that she ice, wrap and elevate it, which she did. Pain meds are generally ineffective for Kim, so there is no relief there. An MRI may be in Kim’s future. But still, Kim is able to laugh when telling people what happened. This would not be the case if it happened to me.

All of which puts me in mind of a poem by Stevie Smith:

Not Waving but Drowning

Nobody heard him, the dead man,

But still he lay moaning:

I was much further out than you thought

And not waving but drowning.

It must have been too cold and his heart gave way,

Oh, no no no, it was too cold always

(Still the dead one lay moaning)

I was much too far out all my life

And not waving but drowning.

Some of you may know that Kim and I have each experienced near-drownings, but most of the time we are just waving. I don’t know if either of us has ever been “much too far out” – hard for us to judge. Neither of us is yet “the dead man” in the poem.

When Kim told Scott about what happened, he said, “Keep taking photos, Mom, until you are one hundred and six. Even if you roll down the hill into the lake.”

And Kim, of course, got the shot: 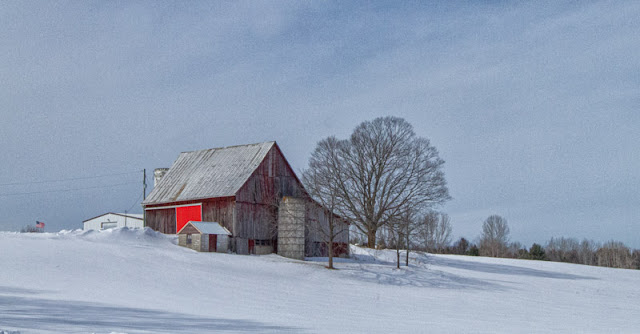 Posted by dhstringer.com at 7:12 AM