My wife and I were discussing male inadequacies with our friend Beth, whose boyfriend, Manny, refuses to cook. I was mainly listening. The conversation veered to the topic of water bottles, and I was asked to get an excellent metal one from our basement refrigerator. The word “fetch” was uttered in my direction, and I came to a realization. Women can relate more comfortably to their men if they think of them not as failed women, but as dogs.
Failed women? Here’s a true story: A friend about my age told Kim and me about a conversation she had with her doctor. She said she complained to him about her husband – that, sweet as he is, he seems insensitive at times, unable to articulate his feelings or pick up clues as to hers, unable or unwilling to notice details of their domestic life, and out of tune to relationship dynamics in the family. The doctor’s response: “So, you’re upset because your husband isn’t gay?”

Men can respond well if we are treated like dogs. The commands should be simple and clear.
“Fetch!” We are good at getting stuff down from high shelves, from out in the garage, or from the grocery store (if it’s not more than three items – a dog is only chasing one ball). If we are not sure what the item looks like or we have a mistaken idea of exactly where it is, “Fetch!” might be too complex a task.
“Roll over!” This command is most often given in bed, especially when the man is crowding the woman. The unspoken part of the command is “away from me.”
“Sit up and beg!” This one also takes place in bed. Usually the man does not need a command to do this. The woman’s response, in this case, is “Roll over and play dead.”
“Heel!” With dogs, this command is given to get the dog to walk obediently at your heel rather than straining ahead at the leash or running off. The key word is “obediently.” How much simpler it would be when, in the midst of some stupid domestic argument, the wife cries out, “Heel!” She’s in charge at that moment, and it’s your job to fall in line. Problem solved.
“Sit!” I hear this one most often when Kim is cooking. I come into the kitchen and ask, “How can I help?” This a command I can follow fairly easily.
“Come!” Readers, write your own comments here . . ..
“Sic ‘em!” From time to time women need to call upon her man’s size or loud voice to chase away threats or annoyances. In my case, this threat or annoyance might be a telemarketer or a loud noise in front of our house. I am especially effective yelling at recorded messages or at cars that are driving away. Unlike dogs, I do not chase the cars.
This sounds simple, but it is not. Women frequently don’t use commands that are this straightforward. They frequently expect their men to know what they are commanding without their actually uttering the command. You know, “You should know what I’m thinking without my having to tell you.” But I ask you, Can your dog do that? (Bad question – most dogs can.)
Women should also remember that some commands are unreasonable. For example, I never told my dachshund, Ricky, “Drive the car!” Manny probably feels the command to “Cook!” is similar. Beth, perhaps, does not see it that way.


And women should also remember that when your dog-men do obey the commands, they should be given a treat.

Strings,
You give men credit to assert we have the maturity of dogs. We tend not to grow out of puppyhood. We want our wives to send us off to work with a pat on the head and the command "Go get 'em! Go get 'em" and upon returning we want them to tell us how well we've done:  "Good boy! Good boy!" and as a reward have our backs scratched .
Bow Wow,
Pete and "Dad" 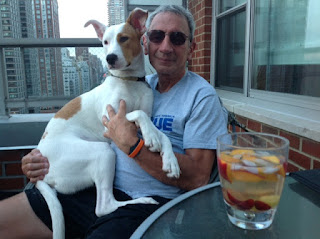 Posted by dhstringer.com at 3:47 PM