The Quest for the Snowy Owl

Ahab pursued the White Whale. Kim and I pursued the Snowy Owl. The story of our adventures will be somewhat shorter than Melville’s – and we have pictures.

I can’t say that seeing and photographing the Snowy Owl was the main reason we moved to Northern Michigan, but it’s in the top three. Kim has a vague memory of seeing one a long time ago, but we can’t count it on our list until we have a photograph, so it would be a new bird for us – if we could find one.

Kim joined a mailing list from the local Audubon Society, which was somewhat frustrating because the notes would give us names of places where the birds were seen, but we didn’t know where those places were. I also have an app called “Birds Eye,” which, when I can figure out how to use it, shows us points on a map where the Snowies were seen. You would think that, between the two, it would be easy to find them. It wasn’t.

Most of the sightings were at a place called Chum’s Corners, about four miles south of our condo. We drove out there maybe a dozen times, with no success. Part of the problem, we learned, was that we were not sure exactly what we were looking for.

Eventually we came up with a more effective way to find them: Go to Chum’s Corners and look for cars inhabited by people with cameras and binoculars.

Using this approach, we finally located a male Snowy Owl perched high atop a water tower. 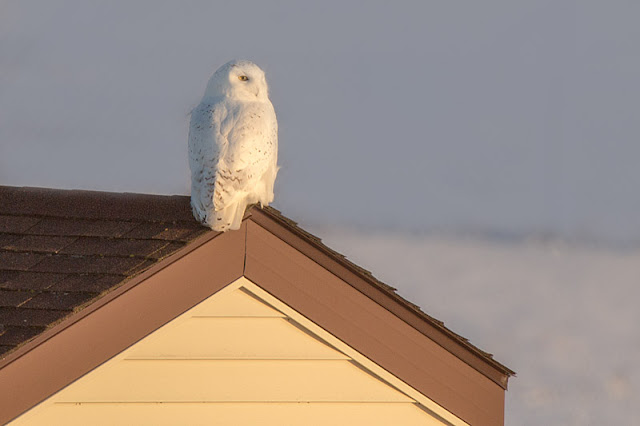 We felt triumphant – so much so that we drove home, downloaded photos, and went to bed early.

The next day we went back for more. This time we saw a car parked near two women with cameras. We parked behind them and soon spotted a female Snowy Owl on the ground. 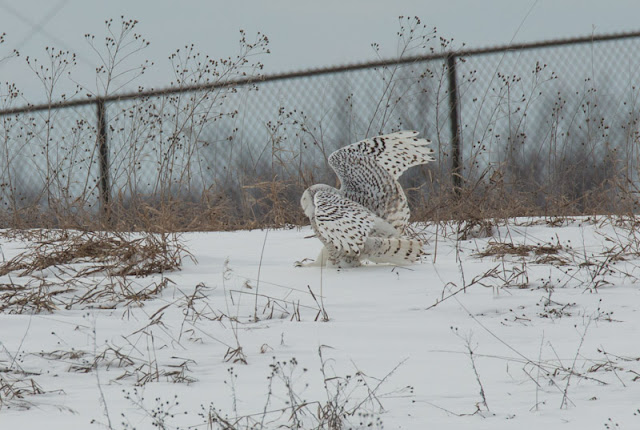 When she again took flight, the women told us that another female frequented a business a short drive away, and they even led us to the spot. (Have we mentioned how nice people are in Northern Michigan?) We watched and waited. Apparently they would spend hours on a high perch before flying down to a meadow to grab a vole or mouse that they somehow see under the snow.

After an hour, and after dropping a camera lens out of the car window into the snow, we drove around to get a closer shot. She obliged by not flying away.

Kim noted at breakfast after our Snowy Owl success that it's important to have a quest in your life, if only to take your mind off of mundane and dispiriting realities. I've had no shortage of quests with my life linked to Kim . . ..

Comments welcome at dstring@ix.netcom.com: What quests are you undertaking?

Posted by dhstringer.com at 8:12 AM