Some of you read this blog to keep track of Kim’s health. Here are some current highlights:

·      She has experienced several days of a heightened sense of smell – my breath was a culprit, along with some maple bacon I bought by mistake and some corn meal mush we tried for breakfast. A google search found that the primary suggested cause is pregnancy. Her chemo has a number of side effects. I plan to contact Pfizer about this one.

·      Kim recently attended a class dealing with beneficial herbs. She reported back on what she learned, but I don’t remember most of it. What I do remember is that we should drink lemon juice before breakfast (doing it) and that it is good for your digestion to drink before dinner a vodka martini, graced with a splash of orange juice and garnished with a slice of the peel, including the gummy white stuff. You are to eat the garnish because the bitters are good for digestion – a small price to pay for a vodka martini. I probably heard this through some sort of filter, and I’m not sure what all this has to do with Kim’s health, but we both felt pretty good drinking our martinis.

·      Kim experiences more or less continuous back pain. “But it’s only pain,” she says, “and I can deal with that.” Her pain a result of the extensive back surgery, where her cancer-eaten vertebra was replaced by a cage. 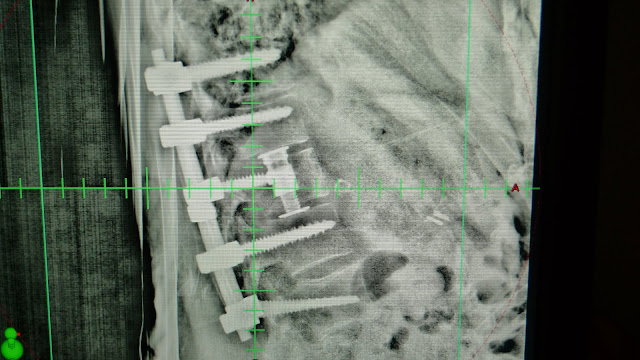 We went to a pain doctor who said, after examining Kim, that there was little she could do other than some sort of X-ray guided procedure to kill some nerves near her spine, which she did not recommend. We had quite a few hydrocodone tablets left over from her recovery from surgery, but we turned them in to the sheriff’s office because they clouded her thinking, and she did not want to deal with addiction. Several of our friends, none of them doctors, have suggested marijuana. Justin, a homeless guy we met on a walk suggested where we could get some. Kim has expressed an interest, but I think it’s mainly because she wants to give me some so she can be entertained.

·      Kim’s pain sometimes interferes with her sleep, though this does not usually slow her down much. She usually goes to sleep pretty easily, though I can’t tell for sure because I’m sleeping. When she can’t get comfortable, she may move to the couch, and if she can’t get comfortable on the couch she rejoins me in bed.  When she is awake in the middle of the night her mind may become busy designing the stonework on our fireplace, deciding what the column supporting our front porch should look like, or choosing which trees to plant once the cottage is done. Our normal wake-up time is about 6:30, which I hit pretty consistently. With Kim it depends on how long she stays awake during the night.

·      Kim has also experienced some fatigue as a result of either her surgery or her chemo, or could it be her lack of sleep? She frequently runs out of gas at about 5 p.m., which happens to be the time when she is preparing my dinner. Kim, being Kim, fixes and serves our meal (I’m in charge of liquids and, occasionally, salads). After dinner I usually do the dishes and Kim may retire to the sofa for a nap, depending on the liquid I poured. Her fatigue also means she does not always climb the four flights of stairs to our condo, sometimes choosing the elevator. I remember how tired I felt at age 18, climbing four flights of stairs to my freshman dorm room. It has not gotten any easier. We still try to walk a mile each day, though some winter days it has to be indoors in our quarter-mile long building.

·      And the cancer? It’s still there, of course, though it’s not entirely clear where “there” is. Nothing has shown up on various scans taken every few months, though metastatic cancer has gotten into her circulation, blood or lymphatic, to move through Kim’s body. The cells are probably still circulating, though her lowered estrogen levels are starving them (or so we imagine), and her chemo works “to put the brakes on cell growth and division in both healthy and cancer cells.” It’s not exactly like Pac-Man. I picture the Ibrance scooting around putting condoms on the cancer cells, or maybe feeding them saltpeter to (allegedly) reduce their reproductive urges (much the way it was rumored to be added to our mashed potatoes when I was in college).

·      The most important feature of Kim’s health status is that she is still alive and kicking. This is something that we celebrate every day, despite the possibility Kim is like Wile E. Coyote when he just ran off the cliff. I remember when Kim was recovering from seven hours of delicate spinal surgery back in May. She was in a lot of pain, but remembering how she had narrowly escaped paralysis, we realized that it was better than being numb, or dead. And when you are alive you can feel a flame burning inside you, glowing, and Kim feels that flame every day. Dead people probably don’t experience that glow.

Posted by dhstringer.com at 7:56 AM