The birdhouse was a gift to us from Scott and Shariee. Modeled after our bark house, it’s about 3’ x 3’ and weighs maybe 150 pounds, plus another 50 or so for the mounting that Scott built. The siding is the same poplar bark that we have on our house.

Our actual house, however, does not have those little round holes in the windows.

After a lot of discussion, we decided to place it in the large maple tree outside our garage – the first thing we or anyone sees when arriving at our home. In order to mount the birdhouse, Scott and I had to remove a large limb that extended over the garage with the flat surface where we cut it providing the base of the construction. We had to pull the limb with a rope while we cut it so it wouldn’t land on the garage roof, which meant that some of the bark was torn, which meant that there was a place where the sap immediately started to run.

We are not sure whether this is a sugar maple tree – one guy told us it is not – but just in case we attached a small pail into which the sap could drip. Drip it did. By the next morning the pail was full, so Kim filtered out most of the bark that had fallen in, and then she boiled it for several hours until the half-gallon of sap became about a cup of syrup. We enjoyed it on our sweet potatoes at dinner, and we saved the rest for Scott and Shariee’s next visit.

Our batch tasted like good maple syrup, but that’s not the point. And it’s great that we made it ourselves, but that’s not quite the point, either. The point is that we were communing with our maple tree, taking its spirit into our bodies. We are grateful to our maple tree, and we thanked it for existing and for sharing itself with us in such a tasty form. (“Sharing” may not be the right word, as it did not voluntarily lop off its own limb . . ..) The next day we paused to thank the tree again before pouring its syrup on our waffles. Our maple tree is a person, in a way, and a member of our family.

Thanking the natural world for its gifts is a tradition that goes back to Native American practices, and it’s continued by many hunters today (including Scott when he actually gets his deer). It’s a tradition that should actually spread as we thank all the elements involved when we spread blueberries from California on those waffles, served with shade-grown coffee from Central America, by way of Maine. Our economy is almost as miraculous as our maple tree, and we are thankful.

But that is not the point. Taking maple syrup into our bodies is an act of communion. I don’t know much about communion as part of Christian practice, but I do recall my friend Kent’s description of a conversation with some Iranian kids when he was in the Peace Corps. They were astounded, he reports, that Christians would actually eat their God. Nevertheless, and my skepticism aside, something happens when you take a spirit into your actual body. It may just happen in your mind, or soul if you prefer, rather than chemically. But why do I say “just happen in your mind”? Let’s pause to appreciate the complex dance between food and spirit.

And then, let’s get the very satisfying teamwork involved in getting the 250 pounds of birdhouse up a ladder and into our maple tree, a process that generates more gratitude as the tree becomes even more of our home. And soon, birds will be involved in our gratitude. 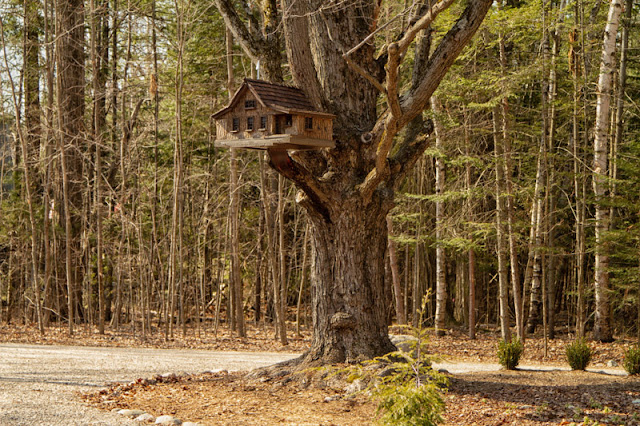 Posted by dhstringer.com at 7:44 AM